Working directly with Haleakalā National Park Staff, we provide funding for projects within our three Areas of Giving: Conservation, Preservation, and Education. 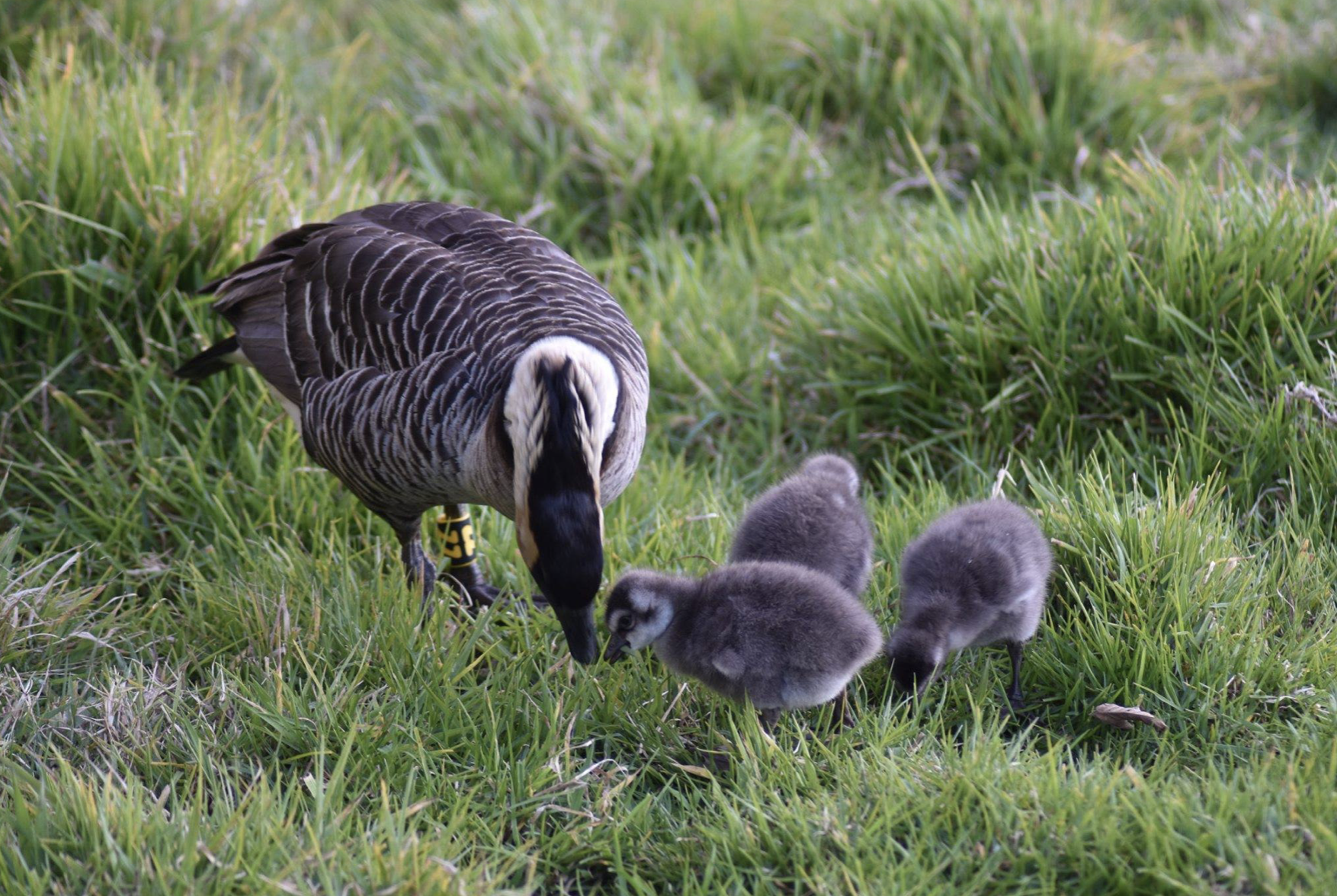 The Wildlife Management program at Haleakalā National Park (HALE) manages populations of native bird species such as the endangered ʻuaʻu (Pterodroma sandwichensis, Hawaiian petrel) and threatened nēnē (Branta sandvicensis, Hawaiian goose). These two ground-nesting species evolved in the absence of mammalian predators and are particularly susceptible to predation by introduced rats and mongooses. Introduced predators negatively affect native birds directly through predation and indirectly through competition, habitat degradation, and subsidization of other predators.

Girls Court has served as a laboratory court to develop and expand gender-specific programming for adolescent girls in the juvenile justice system. Girls Court works on a strength-based model to develop healthy relationships among the girls and their families, return the girls to school or appropriate educational placement, and introduce the girls to employment education and other opportunities in the community. The program has been a successful one, reducing recidivism by 47%,which included a 60% reduction in the number of runaways, and a 63% reductionin arrests.

Girls Court at Haleakalā includes spending three days and two nights in remoteand wilderness areas in both districts. Students learn how the park protects its endemic species, make connections to the park’s cultural and natural resources, learn what they can do to help the park protect species unique to Haleakalā, and meet with park staff to learn about their different roles in the park. Previous visits to the park offered a transformational experience to some of the state’s most underserved and at-risk youth. 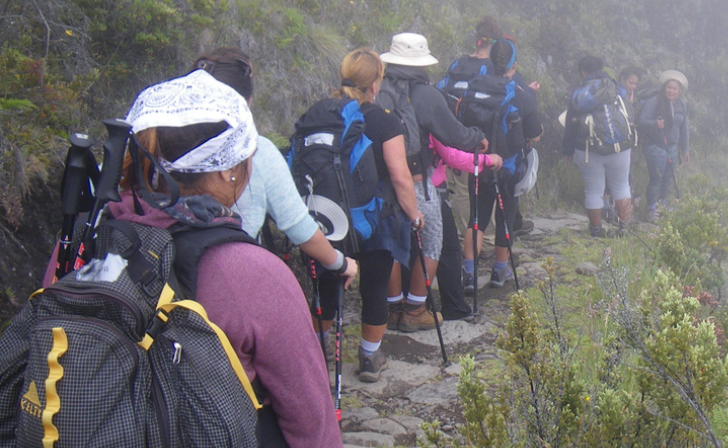 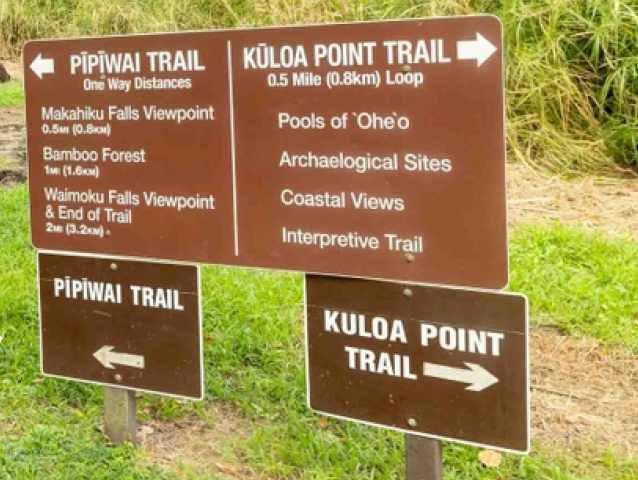 Signage for Protection of Archeological Sites in Kīpahulu District $6,000

For the past two years, the Haleakalā National Park Cultural Resources

Program has been working to clear and maintain the invasive vegetation threatening the integrity of 12 large archeological sites in the makai (seaward) portion of Kīpahulu District of Haleakalā National Park.

This proposed project is intended to complement that work through theinstallation of signage protecting sites that are newly cleared and now visible topark visitors. This project would provide funding for the purchase of long-lasting outdoor signage identifying archeological sites. This project will resultin the protection of archeological sites in Kīpahulu District.

E Ola Koa is a yearlong professional development internship program targeting local graduates from colleges and universities. The training gained during the 12-month internship will provide four local youth with an important advantage on careers in conservation in Hawaii, in the National Park Service, or in any other conservation or land management agency nationwide. 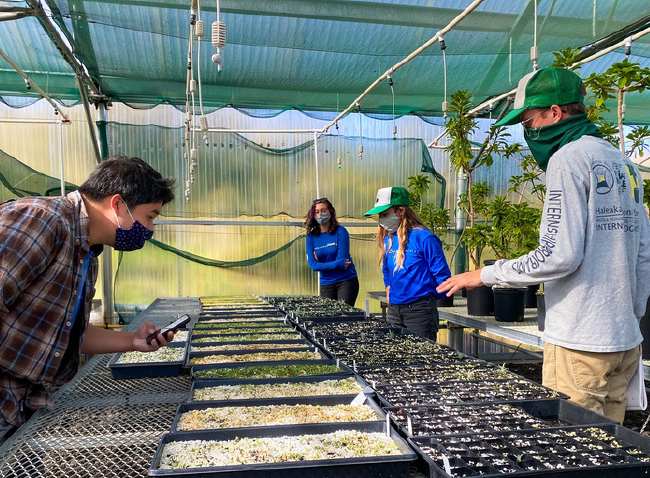 “This unique internship program inspires youth to protect special places like Haleakalā National Park (HALE) for future generations. Witnessing youth get excited about their home and its natural and cultural resources, learning how to protect it then seeing them return to HALE is the best part of my job!” 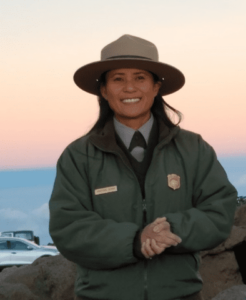 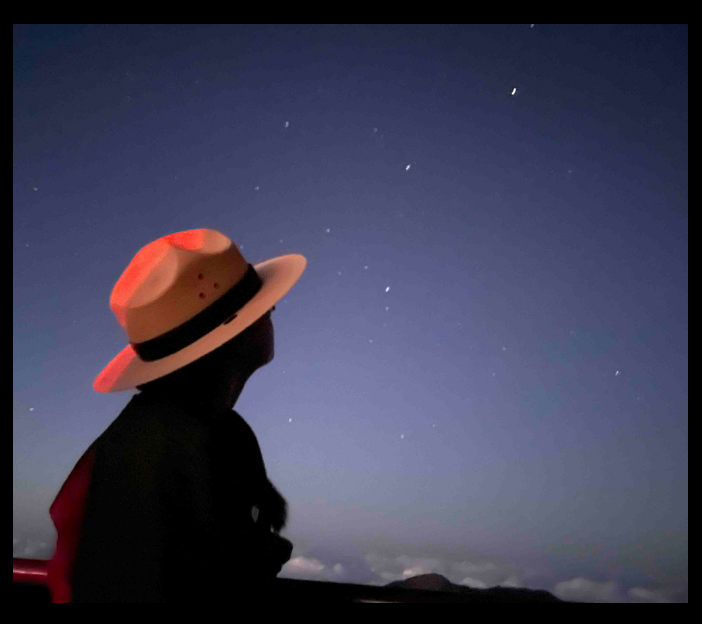 Engaging Our Community in Astronomy $11,000

Haleakalā National Park is uniquely positioned to engage visitors in the beauty and mystery above our heads, day or night.

Investing in programming can help build a community committed to the preservation and appreciation of this shared sky and the wonders it reveals.

This funding focuses on making this year’s night sky programssafe, accessible, and meaningful. Supplying red lights for programs improves visitor and staff safety; having the funds to advertise and engage visitors with giveaways means more people can experience the unique astronomy resources Haleakalā has to offer; and being able to provide guest speakers at special events with stipends invests in crucial partnerships for years to come.

The Haleakalā silversword is a spectacular and highly visible federally listed Threatened Species that occurs exclusively in the alpine zones in and immediately adjacent to Haleakalā National Park.

Past census work has shown the high levels of decline of natural populations of silverswords at Haleakalā. This project will enhance efforts to stabilize the Silversword population of this unique Haleakalā species. Populations have been increased through out planting, augmenting the populations with several age classes of plants in 400 meters square plots across an elevational range from 8,000 to 10,000 ft.

Funding will support re-census of populations and track population vigor in relation to microclimate within these out planted plots. It will expand on the research and knowledge base that has been built in previous years of work with this species. Findings and analysis of these data will be used in future management decisions regarding this and other rare alpine species. All censusing, data collection, and analysis will be done in cooperation with University of Hawaii Natural Resources staff. 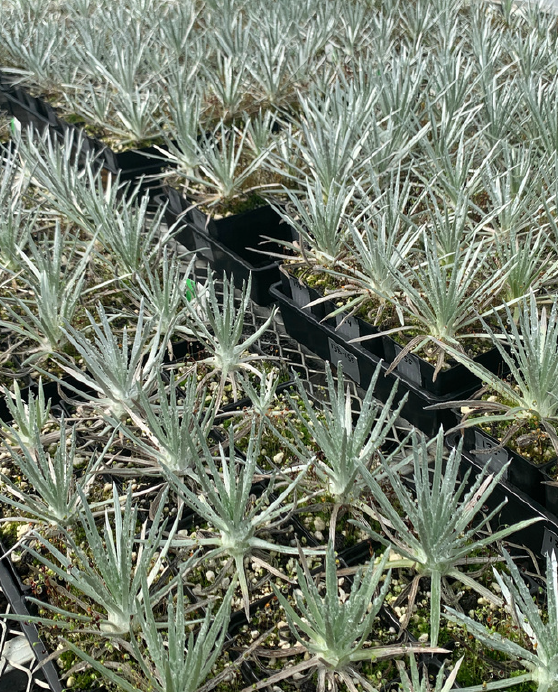 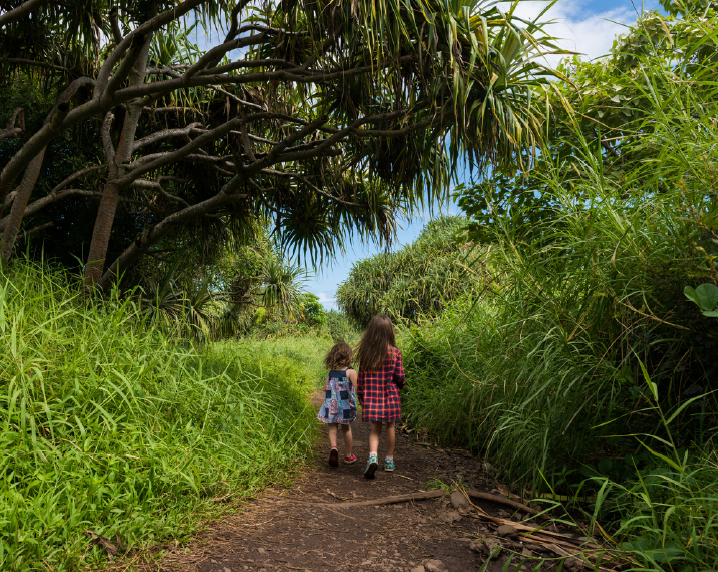 Haleakalā National Park and Maui County Department of Parks and Recreation will collaborate to create a recreational program bringing local residents out to Haleakalā National Park to hike the trails and to explore what the park has to offer. The hope of this program is to eliminate the stigma that Haleakalā is a“Visitor’s Park” and create more opportunities for Maui residents to feelcomfortable and welcome in the park. Planning will include programming thatis adaptive for special needs. This includes adapting programs to make theminclusive to those with mobility issues, learning disabilities, and more.

This partnership is new for the county and park. Maui County first approached the park in 2020 to introduce the partnership. Hikes will be offered once amonth, with room for more availability based on the program’s success.

Game cameras are an essential tool for monitoring wildlife behavior and provide another set of “eyes in the field” when staff are limited. This is especially helpful in remote locations such as Kīpahulu Valley where forest birds such as the rare kiwikiu (Pseudonestor xanthophrys) live. In these areas where access to field crews is limited to a few days every other month, game cameras are able to a continuously record wildlife observations. Trials utilizing game cameras at HALE have also provided informative wildlife observations during the night, when staff are typically not in the field. These observations will directly assist biologists in providing the best management for native threatened and endangered wildlife. 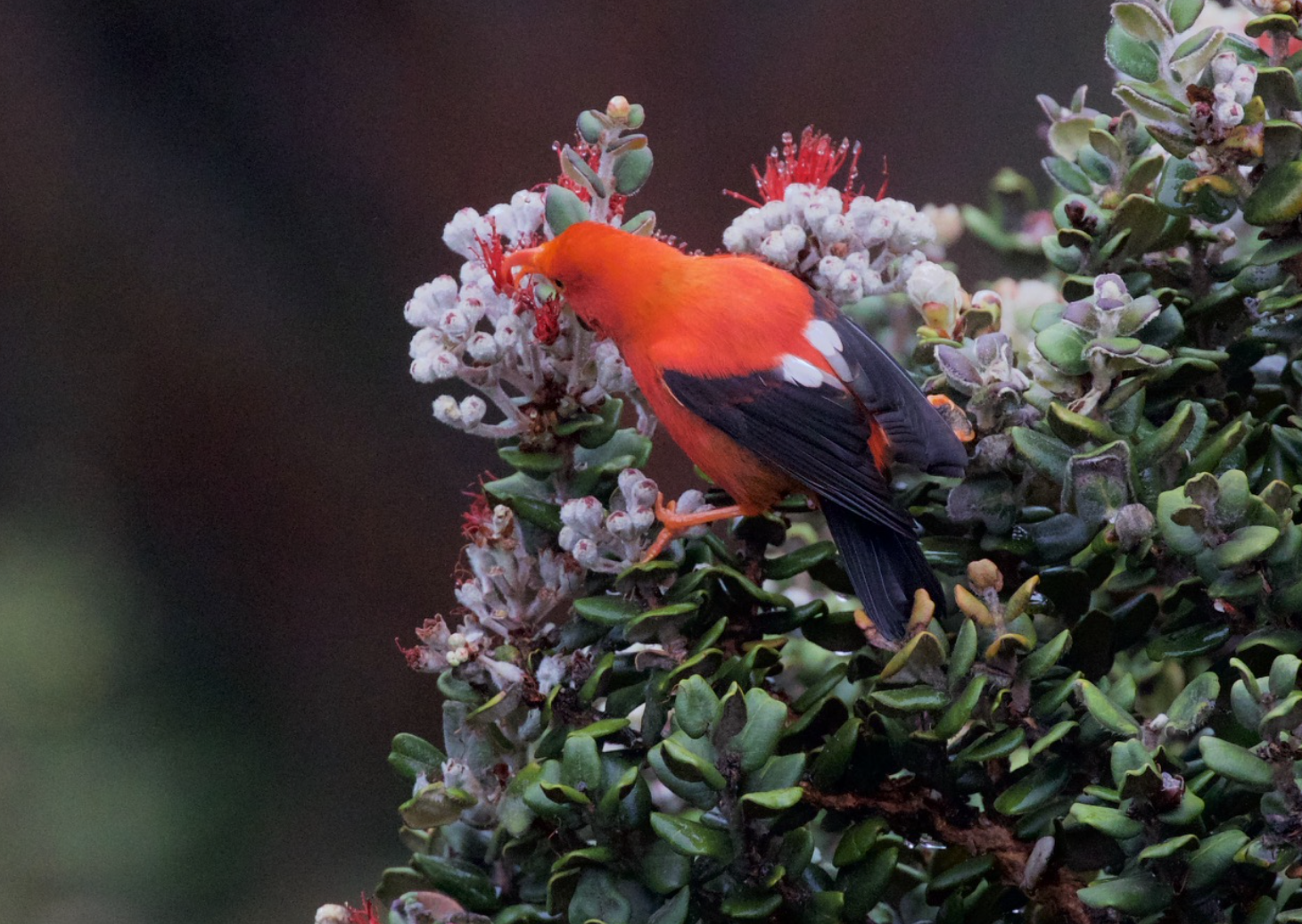 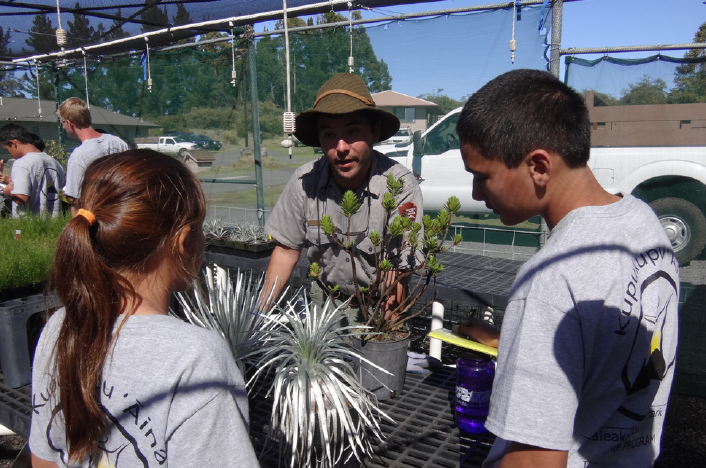 Haleakalā National Park receives requests from schools and other organizations for education programs in Hawaiian but are currently only available in English. Distance learning programs will benefit students from 14 Title I Eligible Hawaiian Immersion schools who cannot travel to the park, are under-resourced in the state of Hawaiʻi(three on Maui), and are under-represented audiences in the National Park Service.

Our Past Funded Projects:

This project would actively support our endemic and critically endangered Maui Parrotbill, the Kiwikiu. Estimates for the total population of the Kiwikiu range from under 300 individuals to less than 150, the rarest native songbird on Maui.

The Kiwikiu only live on the Eastern slopes of Haleakalā, and with climate change, their habitat is being encroached by mosquitos whose range is expanding into high elevation forests, bringing with them avian malaria, to which our endemic birds are particularly vulnerable.

One of the primary challenges with attempting to protect rare species is having current and detailed information about where they are and tracking those changes over time. As the birds become rarer, they often become more difficult to locate.

This project would fund frontline research to determine the population of our Kiwikiu.

The park’s forest bird biologist, Chris Warren, has designed a project to utilize autonomous recording units, also known as “song meters”, to provide a more accurate count of the population by listening to bird song, the data collected, over a period of months, not days, as with the point count survey method. This data will give a much higher degree of confidence of how many Kiwikiu we truly have in the wild, where they are, and be able to more effectively design management actions to save them, and track the results of those actions.

This project is to purchase 10 of these song meters for the park along with associated supplies. We are in a race to save this species, and while the Kiwikiu are at the precipice, there are other species of native forest birds that will greatly benefit from this work.

The current nēnē pen, which serves the population of nēnē on the north side of the Summit, is in disrepair. By rebuilding the pen we will be able to mitigate nēnē mortality and help support populations of Hawai'i's endangered State bird.

"Park records indicate that gosling survival in the wild at Haleakalā is low due to a combination of low nutrition and harsh weather. Nēnē are placed into the pen and provided water and food. Goslings thus benefit from the regular supply of food and water, and are protected from harsh weather, predators, and human hazards, such as cars and road traffic. After reaching fledging age, the entire family is released back to the wild, becoming part of the wild population." 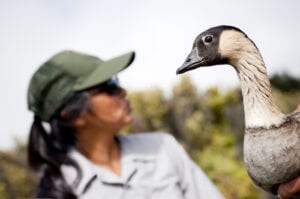 This video will be a documentary-style, focusing on a personal story to draw attention to rare birds on the island of Maui that are at risk due to avian malaria. This 5-7 minute video will be designed to grab the attention of people online and will have the main communication goal of sharing that the birds are important and worth saving. Prior videos created by the park have gone on to numerous film festivals, and these generate opportunities for awareness, support, and engagement on a large scale. 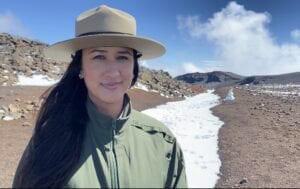 Check out this Haleakalā National Park Video to learn more about Climate Change’s effects on environment and wildlife: